The top convertibles to have in stock 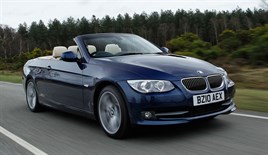 Analysis of searches on an online classified advertising site has revealed the 10 most popular soft-tops for dealers to stock.

Data analysis by Auto Trader has found that dealers are advertising fewer convertibles this year, with the segment dropping in share by 0.6ppts to 5.4% of all cars advertised on its website.

The company said this fall in asking price was due in part to an increase in volume of older stock coming into market and a decrease in newer, higher priced convertibles. For obvious demand reasons, convertible prices are usually at their highest levels in May and June, begin to decline over the summer months and reach their lowest point in the winter.

Its research showed the most sought-after convertible in 2012 is the BMW 3 Series.

Nathan Coe, Group Director, Auto Trader said: "The fall in average asking price for convertibles reflects an overall decrease for all cars noted at the end of June, when it was reported that the average asking price of used cars in Q2 2012 was £8,620, a fall of 5.0% when compared with the same period last year.