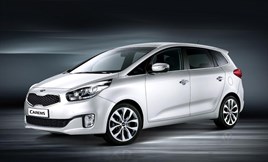 Kia has already shown some teaser images of its new Carens, but the first production images and details have been revealed ahead of the Paris Motor Show next week.

The new model will go on sale in the UK in spring next year and the next generation is a step change in comparison the previous model which was looking dated in Kia’s range.

There will be a seven-seat version available. The larger Sedona MPV is likely to be dropped from the Kia line-up, rather than being replaced.

Kia believes the third-generation Carens will attract a new group of consumers to showrooms in the UK.

The Carens helps to complete Kia’s core modern product range. Michael Cole, Kia UK managing director, told AM recently that design boss Peter Schreyer was still “obsessed” with creating a sports car for the brand, but a production version would not happen until the core range was finished. He admitted the Carens would complete the core range.