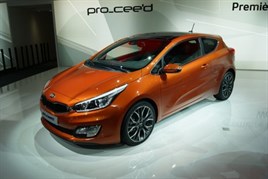 Kia is making no secret of the fact that the sportily styled new three-door Pro Cee'd, revealed today in Paris, is merely a foretaste of something even more exciting to come.

Having completed a total turnaround of its European line-up in just three years, Kia is ready to cut loose. Next year it will introduce its first proper performance model, based on the Pro Cee'd, but with even more dramatic styling and a bespoke engine.

"It was made for even more performance which will send out a strong message that will reflect on our other models," says Dr Joachim Hahn, the head of powertrain development for Kia Motors Europe.

The as-yet-unnamed performance Pro Cee'd will have a 204bhp direct-injection turbo engine, although Hahn is not ready to give further details at this stage.

It is also likely to have a double-clutch transmission (DCT), currently available only with the normally aspirated Gamma engine.

"Looking to the future, we want the DCT to be able to be coupled to turbo engines and we are working on that, but don't ask me about the number of gears," says Hahn.

"But we will stick with a pure dry-clutch arrangement with electro-mechanical actuation rather than a hydraulic pump. It is the most efficient for cost and fuel consumption."

Kia's chief design officer, Peter Schreyer, says the styling of the new performance Pro Cee'd was done at the same time as the mainstream version on show in Paris so that each has its own identity.

"The Pro Cee'd is not just a three-door version of the five-door Cee'd," he said. "We have condensed it a lot more. The only carry-over parts are the hood and fenders."

Shreyer is heavily rumoured to be working on a two-seat rear-wheel drive sports model which will rival the Mazda MX-5.

Kia UK managing director Michael Cole told AM recently that the focus for Kia would start to look at more aspirational models now its core model range was complete with the new Carens.

AM Poll
How has the COVID-19 pandemic affected your attitude or mental health? Please leave a comment
Vote
View all
950