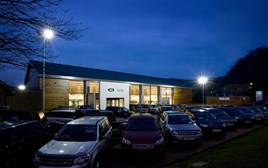 The AM100 dealer, whose franchises in the south of England include Volkswagen, Audi, Skoda and Land Rover, reported that underlying profit before tax in the six-month period was 134% up year-on-year at £1.03 million.

He added that the reduced new car market over the last three years has led to a consequential decline in the number of one to three year old cars in circulation, yet it was encouraging to see Caffyns' aftersales revenue rise by 1.8% on a like for like basis as compared to the same period last year.

"The strategic and operational changes that we have made to the Group are now delivering improved profits.  Currently, the UK market is more buoyant than in other parts of Europe and, while our new car order book is ahead of the same time last year, the outcome for the full year will be dependent on the crucial month of March 2014, Caffyn added.

The car dealer group is undertaking several property projects, and yesterday gained a £5m 10-year loan from Volkswagen Bank to assist in funding various developments, principally its new VW dealership in Worthing which is expected to open in February 2014.

A Caffyns Skoda dealership is being built in Ashford and is due to open next month, and it has added a Seat dealership alongside its Skoda outlet in Tunbridge Wells.

It has also just completed the £750,000 purchase of a 0.77 acre freehold plot adjacent to its 1.3-acre Eastbourne Volkswagen dealership in preparation for its expansion.