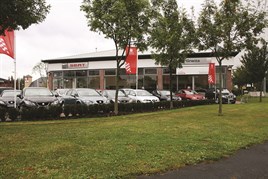 Marshall Motor Group has acquired Grants Seat in Braintree for an undisclosed sum.

This is the latest sale of a Volkswagen Group UK sponsored retailer to larger dealer groups after recent sales of Royce Roberts Skoda to DM Keith, Liverpool Seat to Johnsons Cars and Parkview Skoda to Ridgeway Group.

All 20 colleagues in the business have transferred to Marshall, including managing director Darren Williams, who will report to David Waghorn, franchise director at Marshall for the Volkswagen Group businesses.

Grants Seat was Seat UK's dealer of the year in 2009 and in 2011 won the AM Award for Best Marketing Initiative.

Daksh Gupta, chief executive of Marshall, said: “Typically a business like Grants Seat doesn't come on the market. It's very high profle and led by a very passionate, motivational MD.

"But from a Marshall point of view the business fits with our strategy of growing our depth of representation withcore OEMs and with VW we've grown from one to 15 sites and with Seat to three in a reasonably short time.

"The location was also ideal as it is alongside our Cambridge market area."

Based on the edge of Braintree, the new business is the first for Marshall in Essex and this move continues the group’s recent expansion out of its historical heartland, now being represented in 17 counties across the UK, up from just six in 2008.

Gupta added: “I am looking forward to meeting personally all of our new colleagues and to welcoming them into Marshall. This site has picked up a number of important awards since it opened and we are delighted that it is now part of our group.”

Grants Seat, named after Williams' autistic son Grant, was the last dealership to join the Volkswagen Group sponsored retailer programme, which aimed to support experienced group-level dealer principals in starting up their own business, before it was closed to new entrants in 2008.

Darren Williams and his wife Katie, who also worked in the business, raised more than £8,000 for motor industry charity BEN earlier this year by climbing to the summit of Mount Kilimanjaro.