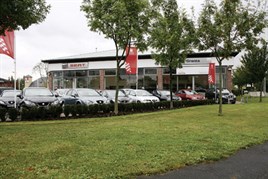 Darren Williams had been head of business at Harold Wood Audi in Romford, Essex, for seven years and under three owners when he saw an opportunity to become his own boss.

It was 2007 and Seat, Audi’s Spanish cousin, was looking for talented motor retail managers to join its sponsored retailer programme.

He impressed Seat UK’s management with his plan to deliver Audi-style levels of presentation and service to attract more customers to Seat, and in early 2008 he was given the opportunity to buy out a disenfranchised dealer in Braintree, Essex.

It was the launch of Williams Hodgson, trading as Grants Seat, named after his autistic son, Grant.

“The thing that bugged me was the bigger the group becomes the lower the focus is on people.

"Everyone talked about customer service, but then we’d be asked to just move more metal.

"We were overburdened with admin, report-ing, spreadsheets and filling in forms.

“I wanted to structure the business where front line productive staff could be taken away from as much admin as possible and left to deliver a good customer experience.”

Williams looked at individuals’ working days and analysed what could be taken away from their core focus.

His business has a mezzanine floor which is home to accounts, marketing and sales administration and his own office.

It is here that the reporting and business controls are done, marketing plans are made, FSA and health and safety is dealt with, and data is uploaded.

On the floor below, line managers are required to forecast only once per month – a 15 minute task – then left to manage their teams and focus on customers.

“Filling in forms really suffocates the business if you let it. Obviously we have the luxury of being a single site owner driver business.

"We still have meetings with the management team every week, a conversation, but we don’t do things for the sake of it.”

He believes major groups should allow a greater degree of autonomy for dealer principals, to let them make decisions and resolve problems.

His approach works: Grants Seat is consistently one of the brand’s top performers, on track for 600 new and used this year.

It was Seat UK’s dealer of the year in 2009 and this year won best marketing accolades at the AM Awards and at the Essex Business Excellence Awards.

Williams was also praised for leaving a lasting impression on every visitor to the dealership.

“The culture of the business is almost as key as the returns,” he said.

When recruiting he looks for people with similar values to his own and often appoints salespeople from outside the industry.

He also gathers feedback from all visitors, including those who don’t buy, with the aim of ensuring their experience was good even if the car wasn’t right for them.

For CSI, Grants Seat is in the brand’s top 10% for sales and 25% for aftersales.

Williams said it is difficult to make a great deal of profit at present, but sees the opportunity increasing, along with its turnover, which totalled £6.5 million in 2010.

Grants is among a minority in Seat’s network in that it is a standalone dealership so covers all its costs.

He is grateful that Seat is a brand which is driving for growth; his business is one of its top performers for fleet and retail, and partners with three major contract hire companies.

Grants has also begun selling five or six non-franchise used cars in the £4,000-£7,000 bracket on top of the 18 to 19 used Seats it sells per month to broaden its appeal to retail customers and bring in additional revenue and profit.

It has a prime site, visible from the A120 trunk road, and it’s adjacent to several restaurants, a garden centre and a children’s nursery.

All customers of rival Westside Kia, one of the Korean brand’s busiest in Europe, must drive past its showroom.

The site has a small footprint and Williams acknowledges that growth will be constricted until he can expand the property.

Longer term, he sees Grants becoming a group of three or four Seat dealerships in the area, should the opportunity arise.

Then his challenge will be to maintain the customer experience at all locations.

Building a brand - how Grants Seat interacts with customers