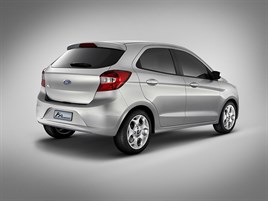 Ford has revealed a quartet of new models, three of which take the company into new sectors of the European market, which it intends to roll out between now and 2015.

They include its first compact SUV, the EcoSport, which is due to go on sale in a matter of weeks; a concept for a replacement for the Ka; and two US Fords which have never previously been available in Europe, the Edge (a large SUV) and the iconic Mustang muscle car.

Stephen Odell, Ford of Europe executive vice-president, says the expansion of the range on this side of the Atlantic is only possible because of the One Ford programme of developing cars for global sale using common platforms.

Both the Edge and Mustang are completely new cars which have not even been launched in the US yet. They are due to be introduced there next year and to arrive in Europe in 2015.

The new Edge will be built on the same platform as the 2014 Mondeo and the next S-Max and Galaxy, which means that Ford could build it alongside them at its soon-to-be-refurbished Valencia factory if it wants to. "We have decided where we will make it for Europe, but we're not ready to reveal that yet," said executive vice-president of global marketing Jim Farley.

But it is the arrival of a new Mustang, engineered and trimmed to European standards, that is exciting Ford's European dealers. Farley says a huge amount of effort has gone into the car's suspension, brakes, interior and powertrains to make it acceptable for Europeans.

In addition to the mandatory V8 - a 5.0-litre unit - Ford has developed a new 2.3-litre four-cylinder Ecoboost engine for the car. It will be offered with a manual transmission as well as an automatic with steering wheel-mounted paddle-shifters.

The next Ka, which Odell described as "very close to the concept car", is also expected in 2015. It will no longer be the result of a collaboration deal with Fiat, like the current version - something else made possible by the One Ford strategy.

Ford is describing it as a global car - sales will start in South America, followed soon afterwards by Europe - but the US does not figure in the sales plans, despite the success of the Mini and Fiat 500 there. "That segment in the US is less mature than anywhere else," said Farley.