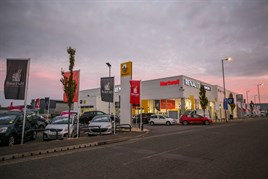 Hartwell has completed its £1.5m refurbishment of a showroom into a multi-franchise car dealership at Kidlington Motor Park near Oxford.

The dealership, previously operated by Cross Roads Garage until Hartwell acquired it in early 2012, now accommodates Citroen, Renault, Dacia and Seat all under one roof.

Kevin Godfrey, managing director of Hartwell, said: "The Kidlington Motor Park dealership is one of a number of projects aimed at increasing our representation and scale.  We’re delighted to bring this additional choice to the Oxfordshire market and further expand our commitment to our customers."

One major addition is the introduction of Seat, part of VW Group, to the dealership which together with Renault, Citroën & Dacia have transformed this location into a motor retail destination.

Godfrey added: “We are very excited about our new partnerships and our substantial investment of over £1.5 million underlines our commitment to delivering a retail experience second to none.”

The commercial Oxford Motor Park in Kidlington is home to a six car showroom which complements the existing Hartwell Ford dealership at the entrance to the motor park.

Hartwell ended its representation of Vauxhall in Oxford in 2012 and sold the franchise to Skurrays.

AM Poll
Which aspect of your business will require most focus in 2021?
Vote
View all
1010