Renault to relaunch Scenic as a crossover 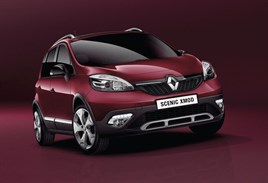 Renault has revealed what will be the new Scenic ahead of the Geneva Motor Show next month.

The Scenic XMOD is a crossover which has been designed to feature Renault’s new design identity.

While Renault is keen to push the new styling direction for the model, the brand also believes the design still retains the Scenic’s reputation for practicality.

The Scenic XMOD has a boot capacity of 55 litres and there is 71 litres if additional stowage space around the cabin. The new model’s seats are independent, folding and removable.

The new crossover will also be the first Renault model to features its new Grip Xtend traction control system which includes mud, sand and fresh snow modes. In ‘expert’ mode, Grip Xtend manages the braking system, while leaving the driver in full control of the engine torque. The ‘road’ mode offers conventional traction control settings, and this mode automatically reconnects at speeds of over 40kph. The ‘loose ground’ mode optimises braking control and engine torque control as a function of available grip.

The new Scénic XMOD and Grand Scénic can all be ordered with the three new engines. There is a new TCe 130 Stop & Start engine, boasting a 15% improvement on fuel consumption over the previous TCe 130 unit.

Further information about the new Scenic XMOD and Grand Scenic specification and availability will be released at the Geneva Motor Show on March 5.