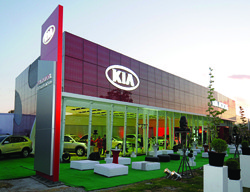 Kia is encouraging dealers to spruce up their showrooms and workshops - or move to new ones - to provide a more welcoming environment for the new customers it has won in recent years.

"We have traditionally been a conquest brand, but now we are working on improving customer loyalty," said Benny Oeyen, Kia's European marketing and product vice-president. Dealerships which are in some cases small homely affairs will become smarter and more modern to cope with the increasing number of customers and cars they now attract, and levels of customer service will be improved.

Kia's flagship sales outlets are the Red Cube centres, of which there are three in the UK, but more than 100 of the company's 173 British dealers have already upgraded their premises or moved to new ones, and the transformation is due to be completed this year.

Kia's European sales have been rising rapidly on the back of a product range which has been almost totally renewed in less than two years. The company sold 338,000 cars in Europe in 2012 - almost 15% more than the year before - while the overall market was down by more than 7 per cent.

The UK contributed almost 67,000 to that total. But traditionally only about quarter of Kia customers stay with the brand when they buy another new car, and the company wants to improve that.

Kia's next new models will be replacements for the Carens compact MPV and the pro_cee'd three-door hatchback. Both are due to arrive in UK dealerships in the next couple of months.

The new Carens, which will be sold in Britain only as a seven-seater, takes the place of two models in Kia's line-up. It not only replaces the old model of the same name but will also substitute for the larger Sedona, which will not be sold in Europe when a new model is introduced.

Kia is expecting a 50% increase in its best-ever annual sales of the Carens in the UK - around 4,500 in a full year - as a result.

The new pro_cee'd, like other three-door hatchbacks, will be a low-volume model, contributing only around 10% (1,500 to 2,000 cars) of all cee'd family sales. But it will help to consolidate the cee'd as the UK's fifth best-selling family hatchback.