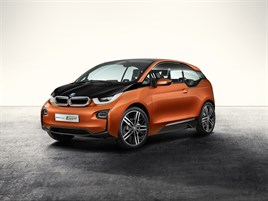 BMW recorded its most successful year ever in 2012 with new records in sales and revenues, board chairman Norbert Reithofer said.

Speaking at the company's annual accounts press conference he said that the total number of BMW, Mini and Rolls-Royce vehicles delivered to customers during the year rose by 10.6% to a new high of more than 1.8 million units.

Reithofer said: "We set new records in terms of revenues, pre-tax profit and net profit in 2012. This gives us the financial leeway that we need to make the right decisions for the future."

This year, Reithofer said the company will introduce new models from all three car brands. "The BMW Z4 will be updated, as well as the 5 Series with its sedan, Touring and Gran Turismo models.

"New to the market will be the BMW 3 Series Gran Turismo, M6 Gran Coupe and the new Mini Paceman. Under the Rolls-Royce banner, the Wraith will be the brand's most dynamic and powerful model ever.

"There will also be the BMW 4 Series model for the first time. We showed the concept at the Detroit Motor Show in January and the response has been very positive."

Reithofer said he was aiming to achieve new sales records again this year although there is unlikely to be any large increase in group profit before tax, largely because of its investments in its ‘i' vehicles and manufacturing technologies.

He added: "The global financial environment is both uncertain and volatile. Our business performance is exposed to many risks including high public debt levels, the continuing recession in the EU, China's flattening growth, uneven development in the automobile markets and political instability in numerous regions around the world."