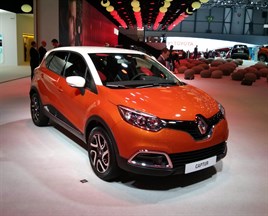 It will plug a huge gap in the range which, by its own admission, Renault failed to fore-see while Alliance partner Nissan was going full steam ahead preparing for the crossover boom.

Ask Ramirez and new senior vice-president of product planning Thomas Lane what they most envy in rivals' ranges and they both point to Nissan's Juke and Qashqai.

"The small crossover segment is the fastest-growing of all. You just have to look at where it is pulling customers from. They are a really diverse group," says Ramirez. "It is the segment which is most important that we should be in."

Captur will come to the UK mid-year and will not be a direct rival for either the Juke or the Qashqai, but will sit somewhere between them.

"From a portfolio standpoint there are not many obvious defects in our range, but the one thing we don't have right now is a crossover," says Ramirez. "What we have coming answers most of the basic questions. We have a lot of missing things in emerging markets, but not Europe. But medium and large crossovers would be nice."

Lane says Renault has no ambitions to cover 100% of the market again, just those sectors where it can compete reasonably and profitably. "We are just in the process of analysing what is most suitable for the brand to cover," he adds.