Could Europe’s woes add to self-registration? 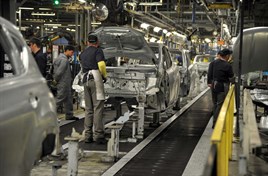 Make a long look at the European new car registrations table and the UK sticks out as a shining star.

The UK market has been posting growth for more than 13 months in a row now while Europe’s largest car markets struggle with double digit dips in sales.

Retail customers here are still buying cars and dealers are working hard to keep the momentum going – registrations were up by 5.9% in March to 394,806 units and by 5.3% overall in 2012 to 2.04 million units.

As a potential “honeypot”, industry commentators have previously said how manufacturers with excess production will put pressure on UK dealers to register more cars this year to pick up the slack.

Pre-registration activity contributed to a summer of discontent among UK dealers in 2012.

A ‘straw poll’ of dealers by KPMG said this activity accounted for 98,500 registrations each year – or, according to AMi data (www.am-online.com/ami), 18 units for each of the 5,500-plus franchised outlets.

However, UK national sales companies ordering cars priced in euros may have to ease off the throttle following the plate-change month of March due to the pressure on sterling.

Chancellor George Osborne’s downgrading of Britain’s economic growth forecast and call to “keep interest rates lower, for longer” are expected to add to pressure on sterling in the medium term, potentially making new car business less profitable for most manufacturers.

Last summer when sterling/euro peaked at 1:1.287 the car would have cost just £9,324 to the manufacturer. CAP believes the exchange rate was a significant factor behind the rapid growth in private registrations since Q3 2012.

CAP believes we will still see forced registrations, but the intensity  will be limited to specific manufacturers, rather than an industry-wide trend.

He said: “There’s an element of it that Britain is seen as a regional honeypot for Europe at the moment.

"The economy is holding up and the pound is OK. You’ve got a situation where continental Europe is going very soft so all manufacturers are looking to move excess production to Britain.

“To an extent, the automotive market here will be what it will be. "The cars will come and they will be registered at some point. There is going to be a growth in the industry. The question is where will that growth come from? Rental or self-registrations?

“In terms of dealer targets – the majority are focused on retail and that’s a market that is growing and those targets reflect that.

"The overall share will be the more controllable registrations which will be rental and, although Ford doesn’t do it, some manufacturers do an awful lot of self-registrations.

"They go into the industry numbers but they are essentially discretionary and you decide if you want to do them or not.

"If someone has built the model it will be registered and I think there will be more self-registering this year.”

He said: “The UK market is a bit of an anomaly in Europe at the moment where consumer spending is very flat, but the car market appears to be booming. But some commentary pointing to the causes is ill informed.

"Some manufacturers are pushing quite hard into rental but retail demand is genuine.

"There has always been a level of self- registration in the UK and today it is not as significant as it was 20 years ago or 10 years ago.

“PCPs have increased from about 22% of sales to 33% in the past six years, and given the advances in technology in terms of CO2 reduction, improved fuel economy and lower SMR costs, the worst thing they could do with their money at the end of the term is pay the outstanding balance on the car.

"The favourable exchange rate enabled attractive deals on cars sourced from mainland Europe although this particular was unlikely to continue given the recent currency rate movements."