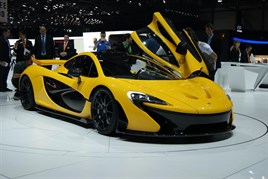 Some people argue that in an age of economic uncertainty motor shows are a waste of time and money.

Whether in reality you can justify the return on investment is open to debate.

The Economist (March 17), commenting on the Geneva Show, said ‘outside the show’s well-organised halls, Europe’s car market is a mess’.

Having just completed a research project at the Geneva Show I was left wondering (as academics do) what I would write if I was asked to critically evaluate the benefits of the Geneva Motor Show in an exam.

The obvious winners are the Geneva hoteliers who suddenly find that they can charge massively-inflated prices.

This year at the same time as the auto show there was an MBA Recruitment Fair running at the Four Seasons at which Loughborough had a stand.

Although the MBA Fair was quiet I was massively impressed that the hotel had more Bugatti Veyrons parked outside than there were on display at the show and it also had Bernie Ecclestone having coffee in the bar.

There are obviously benefits for the press to be at the show with opportunities to build their stock of car photographs and get interviews with some of the key principals and designers as they launch a new vehicle or put forward a concept for which they are seeking a reaction.

Perhaps the most interesting aspect comes from the manufacturers.

For many it is a real opportunity to make a statement about their product and reinforce key brand messages.

Looking back at Geneva, it is interesting to note how each of the brands attempted to communicate their brand values.

Ford produced an all blue line-up while Renault introduced the concept of ‘the mound’ with cars pointing downhill.

Lamborghini decided to supplement the cars with a regular fashion show while the most densely-crowded stand was Alfa Romeo which simply had provocatively-dressed women around its vehicles.

Toyota included dancers in the launch of their i-ROAD concept, while the Mini stand personnel seemed to break out into dancing at irregular intervals.

Some manufacturers seemed to be making a statement, with Qoros producing a stand with a car in an elevated position obscuring the sight lines to some more established manufacturers.

The show does give opportunities for manufacturers to pilot test more innovative retail concepts.

Seeing how the public react to display information and what cars they are drawn to is useful information which, if translated into a retail concept, may help sales in the dealership.

For me, over the years one of the stars of the Geneva Show has always been Morgan.

Charles Morgan doesn’t do Frankfurt or Paris but in a typical understated British way manages to draw immense interest at Geneva without any glitzy presentation.

For Morgan the car is the star, but it is noticeable that whereas other CEOs fly in and fly out, Charles can be seen walking the stand and talking to the assembled multitude beyond the obligatory press days.

The public seems to flock to the European shows with unabated enthusiasm.

I met two young guys who had come from Essex to see the show.

These were not petrol heads but just people interested in cars and complaining about the lack of a ‘proper’ motor show in the UK.

There is also a sub-culture that underpins the show revolving around the various stand staff and their dance routines.

Toyota’s dance involved coming out of the cars, Ford did Gangnam Style, while VW performed what looked like a line dance.

The winner from what I hear was Opel which included singing Footloose as well as dancing.

Maybe bizarre dancing, innovative stands, glamour and great cars are what motor shows are really about.

As Carlos Ghosn has said: “Carmakers who can make people dream are still needed.”

Maybe by presenting cars that very few people can afford and putting on a show that raises people’s spirits is something that a motor show can do and, as a result,  the return on investment may be a little wider than we think.