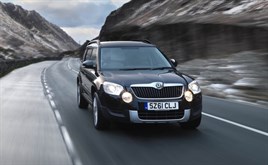 Skoda will add a second SUV to its line-up, larger than the Yeti, as part of its plans to increase global sales by 50% over the next few years.

Skoda will play a part in Volkswagen Group's ambitions to become the world's largest auto-manufacturing conglomerate in the world by 2018. Skoda will have to increase sales from just under a million last year to 1.5 million. A second SUV is seen as a vital cog in that plan.

Skoda is currently embarking on a product renewal and expansion programme.

A new Octavia estate, the third stage of the plan after the launch of the Rapid and new Octavia hatch, goes on sale in the UK in June priced from £16,790. The estate range will include front- and four-wheel-drive versions.

The outgoing model became Europe's best-selling estate for the first time in 2012 with sales of 124,000 - a third of the Octavia total.

A new Scout version of the estate, with greater ground clearance, lower body cladding and SUV-style additions, will be introduced next year to broaden the appeal of the range. Before then the Skoda will add a five-door Sportback version of the Rapid at the Frankfurt Show in September.

But the Czech company will also need new production facilities to reach its sales targets. Last year's sales of 940,000 cars equalled the company's production capacity at its plants in the Czech Republic, China, Russia and India.

Two more factories are being built in Skoda's number one market, China, which will more than double capacity to half a million cars a year, and further expansion in Russia is likely. Skoda aims to make Russia its top market in Europe in the next few years. Currently it sells 100,000 cars a year there - 30,000 less than in Germany. UK sales were around 65,000 in 2012.