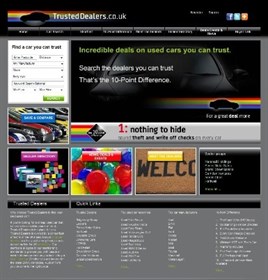 The NFDA has described the deal as “game changing” as the website becomes the consumer face for the trade body.

The move is designed to bolster opportunities for both organisations to promote the consumer benefits of buying from an approved franchised dealer, as well as driving opportunities to increase the Trusted Dealers member base.

Following the deal, Peter Johnson, chairman of the NFDA will join the board of Trusted Dealers to support the integration of the two organisations, alongside Trusted Dealers managing director Neil Addley and founding members Andrew Dyson, Robert Forrester, Peter Jones and Ken Savage.

Trusted Dealers was launched in January 2011 and now counts over 50 of the UK’s largest franchised dealer groups as members. It has a network audience of 1.2 million unique users each month.

Today’s announcement comes on the back of a run of commercial partnerships for Trusted Dealers including stock feed agreements with Compucars, Carsite and Used Car Expert.

Most recently, in November 2012 it joined forces with What Car? to launch the ‘What Car? Approved Used’ consumer badge.

Addley said: “This deal marks a game changing opportunity in terms of adding huge industry weight to Trusted Dealers as well as providing the NFDA with a consumer facing site.

“Trusted Dealers is the safest place to buy a used car and after several months of working together on joint initiatives, it became clear a formal partnership would be an effective way of working to our common goal of campaigning for and benefiting the franchised dealer.

“This can only benefit our core commercial objective of delivering low cost, quality sales and aftersales leads for our members.”

Sue Robinson, NFDA director, said: “This is a tremendous boost for NFDA – it shows the confidence and involvement of the dealer networks in their dedicated trade body.

“It will raise the ‘consumer facing profile’ for the NFDA and put us on the map.”