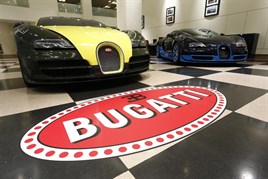 HR Owen’s Jack Barclay dealership in Berkeley is holding a special Bugatti event displaying the two fastest production cars in the world for a select audience of customers.

The event is running from June 11 until June 15 and includes the European premiere of the fastest open top production car - Veyron 16.4 Grand Sport Vitesse, which can reach speeds of 254mph.

The Jack Barclay showroom will also have the fastest production car in the world on display with the 268mph Bugatti Veyron 16.4 Super Sport, as well as four other Veyrons.

One of the guests of the opening of the exhibition was Bugatti’s Pilote Officiel, Pierre-Henri Raphanel, who achieved the world record in the Super Sport in 2010 and was responsible for training pilot Anthony Liu from China for his world record run in the open-top Vitesse last April.

The total value of the six cars on display at the showroom is estimated at around £11.4 million.

AM featured an in depth interview with HR Owen chief executive Joe Doyle earlier this year and it is available to read online.

HR Owen leads global sales for Bugatti, selling nine in 2012 in comparison to the annual average of two.

HR Owen’s Bugatti UK sales specialist Anita Krizsan sold all of the cars and it is the best performance for Bugatti in HR Owen’s history. It demonstrates how well insulated the super-rich are from the economic woes of the world.

Krizsan explains that the key to success is her absolute enthusiasm for the product.

She said: “Getting to show people this work of art is exciting. The key is sharing that enthusiasm and expert knowledge about the car, but also making things as easy as possible for the customer.”

The majority of communication is by text message and test drives are rarely requested. If the customer does not already have a car collection, Krizsan knows they’re unlikely to buy. She will only deal with the customer directly – no brokers or fixers.

Krizsan said: “These customers want the absolute minimum of fuss and they want you to be completely straight with them at all times.

“I have answered texts at 3am because they might be in a different time zone.”

Due to the rarity of the product, there can often be multiple people interested in the same model.

An invitation to a three-day factory tour in Molseim, France where customers can spec their Bugatti in the atelier, which is surrounded by rolling hills and prancing deer, usually convinces billionaire customers to sign on the dotted line. Luckily HR Owen allows payments in three large instalments, rather than the full £1.5m in one go.