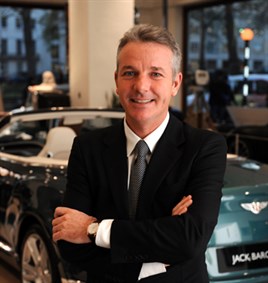 Walking past supermodels on the way to a dealer interview is not a regular occurrence on AM. The fact Kate Moss was out shopping 50 paces from HR Owen’s Jack Barclay showroom highlights how different this group is from any other in the UK.

It has access to one of the largest (high net worth) customer databases in the world, has to manage considerable costs with a largely central London-based operation and has been trying to stabilise the business after the recession.

Profits have been on a roller-coaster ride in the past 10 years and previous chief executive Andy Duncan left the business after just 12 months in the role.

Its collection of high-luxury franchises brings with them high expectations, but, after 13 months in the job, CEO Joe Doyle has steadied the ship and is ready to take his plans for HR Owen forward following a positive first year.

The group is made up of arguably the strongest brands in the world, from super luxury specialist sports cars with Bugatti, to Aston Martin, Lamborghini and Bentley (see AM's in depth Bentley franchise analysis here). It also has service franchise agreements with BMW, Audi and Mini.

The businesses rebranded in September 2012 and this was the ignition switch for all the developments it had been working on. Doyle told AM: “The rebrand was the stepping- off point to create a consistent identity across the group across all dealerships.

“One of the things I felt when I joined was that people within the group more or less felt like they worked for the franchise and not for HR Owen. We’ve tried to create an identity which reflects our heritage, but it was also giving us something to unite behind.”

Doyle admits that before the rebrand, customers were unlikely to identify their experience with the group, seeing only the brand above the door.

He said: “It used to be hard to identify that you were in an HR Owen showroom before we made the changes. It was very rare that you would find the logo above the door or even find it represented in a consistent way.”

This led to the group looking to redefine what the culture of the business was all about. To decide what you want your brand values to be, you have to understand your customers’ expectations.

For Doyle, it was straightforward. He said: “If you think about it, you don’t need any of our cars to get from A to B. Our customers are absolute petrol-heads and that determines the kind of expectations they have of us. Our customers should feel like part of the family and be able to come in just to have a chat about the cars.”

It wasn’t just the culture of the businesses which needed attention. HR Owen was also in need of a systems overhaul.

Doyle joined the business from HPI. His background in software and IT led the business to review the way it handles data and ultimately to a new customer relationship management (CRM) system.

Doyle went outside the industry to find the right CRM and decided on Salesforce which is used by brands like Burberry, O2, Boots, Dell and Spotify.

He said: “Salesforce is based in the cloud, but it’s bespoke to HR Owen’s specific requirements. They were quite keen to get into the motor sector and so we got a competitive advantage in being their first automotive customer.

“We are now capable of complete transparency and tracking. Everything we do now is feeding into the new
CRM system.”

Doyle is an advocate of cloud-based IT systems because it eliminates hosting costs or disaster recovery, with all computer resources based on the internet. As long as the business has good links to the internet, HR Owen’s systems can be accessed from anywhere and on almost any platform, including tablets and smartphones.

He said: “For a business of our size I find it to be cost effective. It means you can also add modules as you go in a fairly inexpensive way.”

HR Owen now outsources the management of its IT, with one company handling desktop support and another handling communications and bandwidth.

HR Owen is still using the ADP dealer management system for all of its transactional data, but its Salesforce system handles all of the group’s customer management.

One of the key advantages to using the new system is the ability to bolt on additional items. HR Owen’s telephony is run through Salesforce. When a customer calls, the screen displays all of the customer’s details to the sales executive before the phone is even answered.

The group now has all of its systems in one place and can draw from a centralised database.

Doyle said: “You could have been a very good customer of Bentley in our group, walked into a Ferrari dealership and we wouldn’t know you.

“We’ve got one of the UK’s best high net worth customer databases and the power of being able to pull that all together for future prospecting and customer management is significant.”

There is also a campaign module which manages email and postal campaigns, as well as event management.

Everything is captured and traced, making it easier for the group to identify prospects and communicate with them correctly. This allows Doyle to develop a formula for the many  leads it needs to turn into prospects, that turn into test drives which generate sales.

He said: “We’ve now properly worked that funnel out across the business and I can now divide that information by franchise, account manager, dealership and division. It helps the sales guys and sales managers day to day.

"It helps me to direct the marketing spend more effectively across the business too.”

HR Owen's Mayfair showroom was turned into a pop up nightclub last year for the launch of the Bentley Continental GT V8: