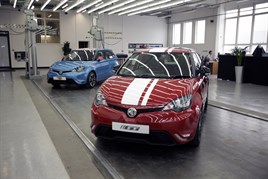 MG has unveiled the full range of styles for the UK MG3 at its newly enhanced European Design Centre in Birmingham.

The original studio was part of a £5m investment programme and it has more than doubled in size since then, making it the fifth largest automotive design studio in Britain.

The latest investment enables MG to carry out even more advanced design work.

A five-axis milling machine allows clay models to be produced within 36 hours and life-sized images can be projected onto a giant screen with 2D and 3D capability.

More than 400 people are now employed at the Birmingham site, where the new MG3 will roll off the assembly line later this year.

Described as ‘a distinctive statement of modern British style designed to target young and style conscious buyers’, it carries forward many of the styling cues from the MG Zero concept car.

It will become the second modern MG to come out of Birmingham, following the MG6 GT fastback and Magnette sport saloon.