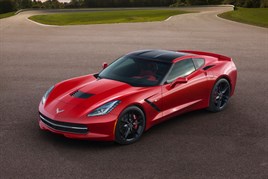 Chevrolet’s new Corvette Stingray will be priced from £61,495 when it goes on sale in the UK in autumn.

The new left-hand drive coupe will only be imported in small numbers but each car will come with a Z51 performance pack as standard, which includes a specific sports handling set up, larger front and rear wheels and tyres, larger brakes, magnetic ride control suspension that has been tuned for European roads, performance traction management and performance exhaust.

Right-hand drive versions could be produced later in the Stingray's model life.

Susan Docherty, president and managing director, Chevrolet and Cadillac Europe, said: “The advancements in design, technology and engineering have given us a car that will define the decade and far exceed consumers' expectations.

"While the Corvette Stingray can compete with its rivals in terms of performance, it remains affordable.”

Power will be supplied by the new 6.2-litre LT1 V8 engine paired with a seven-speed manual transmission with active rev matching.

The Stingray will also come with Chevrolet’s MyLink touchscreen infotainment technology which can sync with smartphones.