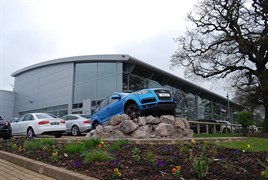 Peter Smyth, Swansway director, said: “This is a fantastic result, particularly against the general economic backdrop. We’re now in our tenth year of trading, and I believe that the caring, honest and proud culture, which we’ve built over this time, is really helping us achieve these great results.

“We know we have happy staff as we’re currently ranked 37 in Best Companies to Work For and 16 in Great Place to Work; this gives us happy customers, which in turn gives us a very healthy bottom line.”

In July 2012, the group acquired an ailing Land Rover dealership in Stafford and has achieved breakeven after the first six months.

Director John Smyth said: “We are looking forward to the second half of 2013 with tremendous optimism; the first half year pre-tax profits are £2.5m and we expect the full year profit before tax to be approaching £5m profit.

“It’s too easy to settle for mediocre or poor results in the current economic climate and wheel out the ‘blame it on the Eurozone’ excuse; indeed, to some our caring, honest and proud approach to staff and customers may be seen as rather basic and old-school, but ultimately the results speak for themselves.”