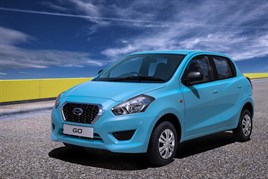 Nissan is bringing back the Datsun brand with a budget city car called Go which will help boost sales in emerging markets.

There are currently no plans to bring the Datsun brand to the UK.

The Go has been launched in India first priced at £4,425 and it will be competing against Hyundai and Suzuki in an attempt to capture a 10% market share by 2016. Nissan currently has a 1.2% market share in India.

Datsun models will be individually developed for different markets, but the concept will follow a common inspiration. Datsun GO will be the first of several Datsun models that will be launched later in 2014 in Indonesia, Russia and South Africa.

Renault is currently using its Dacia brand in Europe to offer options to customers looking for a basic car at an affordable price.

VW is expected to make a decision on whether it will launch a budget brand of its own this year. The VW brand would be aimed at emerging markets.