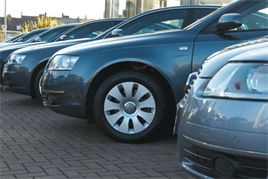 Used car sales in the first three months of the year fell by 5% to 1,653,668 units in comparison to the same period last year, according to the latest Used Car Sales Index from Experian.

The drop is the lowest first quarter sales figures since Experian started the index in 2005.

Some of the new car growth the UK market this year would have been at the expense of used car sales, with strong manufacturer offers tempting customers. The poor weather in the first three months of the year would also have made an impact.

The specialist sports category (including the Audi TT and the Mazda MX-5) saw the most significant fall – down 10.4% on Q1 of last year.

The upper medium segment was the second hardest hit (which includes the Ford Mondeo and the BMW3 series) with a 10.1% drop in sales on Q1 2012.

Across the UK, all areas experienced a decrease in used car sales in the first quarter of 2013, with sales in Greater London falling by 7.9% and sales in Scotland experiencing the second highest fall at 6.7%, compared to Q1 2012.

The Ford Focus kept its crown as best-selling used car of the quarter selling over 77,000 units from January to March.

The Volkswagen Polo retained its position in the top ten narrowly overtaking sales of the Ford Ka, which kept it out of the top ranked used cars in Q2 and Q3 last year.

In addition, Volkswagen and Nissan were the only two to see an increase in used car sales - up by 1.2% and 1% respectively.

Andrew Ballard, principle consultant at Experian Automotive, said: “Our figures show that some categories are consistently performing well even in a challenging environment.

“Electric and hybrid vehicles, and also the 4x4 segment, have shown strong growth in used car sales indicating that reliable mobility in harsher weather conditions plus environmental and cost saving factors are front of mind.

“These trends are important indicators for dealerships when identifying and building the optimum, profitable stock mix.”