New Mazda3 will help build volume in the UK 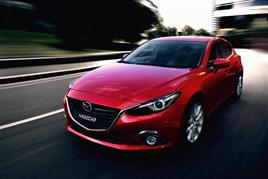 The new Mazda3 has been revealed and it will play an essential role in building volume for the Japanese brand for UK dealers.

The new compact, which makes up almost one-third of Mazda’s global sales, is a vital part of company plans.
It will initially be available with three petrol units and one diesel.

The 1.5-litre petrol is a completely new engine and, although Mazda hasn’t released fuel consumption or CO2 emission figures yet, it is expected to rival Ford’s 1.0-litre Ecoboost used in the Focus.

The diesel will be the same 2.2-litre as seen in the Mazda6, and there is a good chance it’ll be below the 100g/km threshold.

A smaller diesel is expected at a later date.

Mazda Motor Europe president and CEO Jeff Guyton said: “Everything about the all-new Mazda3 is exciting, from the way it looks and feels to its dynamic performance, nimble responsiveness, reliability and operating costs.

“We already have big expectations for this model’s success in terms of sales, but I suspect it may even surprise us.”

Mazda is keen for the 3 to be a success in the popular C-segment, so a host of technology will be available such as mobile internet connectivity which will allow the radio to read out social media updates.

The 3 will appeal to a young audience, with its design having many traits from the Mazda6.