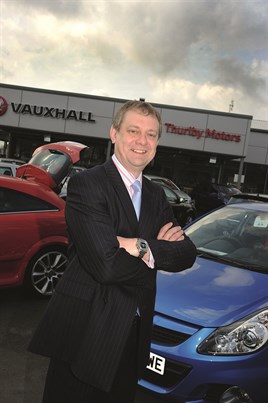 “We are slightly ahead of this and getting better,” said Roberts.

And he added that a digital lead management system for aftersales, akin to the existing one for sales, is not far away.

Other digital changes include an overhaul of the Vauxhall website, incorporating design and tools to make every key destination available within three clicks.

Vauxhall also plans to make specific changes in its network to drive the plan to be ‘number one’.

For starters, there is a new corporate identity. The CI programme is under way, encompassing interior and exterior requirements.

“There will be a scaling requirement for some of the centres. So we have mapped centres to ensure they fit the market requirement using a territory’s value based on units dictating the number of display bays.

“This will range between seven and 12 bays for a core site and five for a satellite.” Whereas core sites were previously given a minimum new car display requirement, now it’s a maximum requirement. About 7% of retailers will have to alter sites for this.

In addition to size, there are requirements to introduce the new ‘delta’ architecture, with new signs displaying the revised corporate image, furniture, lighting, plus a digital strategy.

“We have managed the CI project case by case and we are going to support dealers financially on some signage and furniture costs.”

Vertu’s Bristol Street centre in Northampton is one of the first sites to meet the new CI requirements.

And at Arnold Clark’s newly-opened Adam Centre, in Glasgow, Vauxhall is trialling the use of iPads as a sales tool. “At one stage we thought the iPads should be fixed to the car stands, but they are much more effective in a walk-around with the customer,” Roberts said.

“Then the sales person can play back the chosen configuration on their PC when the customer gets to their desk.”

Also on trial is a configuration in the bigger showrooms with large touchscreens for customers to ‘assemble’ the car they want and be shown demonstrations of technology on offer.