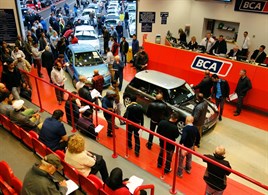 The 2013 BCA Report also reveals that the used car market reached a record high in terms of value in 2012, at £38.1 billion, outperforming the total new car market value by £5.8 billion.

In particular sales of younger used cars (0-2 years) increased significantly, rising by 18.6% to 762,000 and reversing a three year trend of falling volumes in this age sector.

BCA commissioned BMRB International to carry out face-to-face interviews with 4,000 car owners in the UK to identify their priorities and experiences in buying and owning a used car – what convinced them to buy their latest used car, what influenced their choice of seller, what type of car they might buy next, who they might buy from and when.

Detailed analysis of the BCA Used Car Report 2013 will be available from author  Professor Peter Cooke at the AM Used Car Market Conference in Coventry on October 13. For more information including details on how to book click here or email lauren.kendrick@bauermedia.co.uk or call 01733 395133.

Trevor Finn, chief executive of Pendragon, commenting on behalf of the group's volume division Evans Halshaw, said: “As the latest report from BCA indicates, motorists continue to recognise the value offered by used cars as they provide a viable alternative to new ones, especially in the current economic climate.

"The fact that the used car market has substantially out performed new car sales is therefore no surprise. Used volumes grew by 7%, like for like, in 2012 and have grown by a further 9% in the first half of 2013. This highlights the continued confidence in the reliability of older cars.”

However, the long-term impact of the fall in new car sales during and immediately following the recession can still be seen, with the average age of vehicles on UK roads reaching a 30 year high at 7.59 years.

There has also been a 5% rise in households without a car, with London recording a 12% increase in ‘no-car’ families.

In terms of sales, dealers continue to dominate the used car market, accounting for 57.2% of all used cars sold representing a massive 74.4% of the total market value.

Dealers sold 4.07 million used cars last year, a rise of 8.9% and, reflecting the changing age profile of the used car market, there was a greater focus on older used cars to mitigate the uncertain supply of younger vehicles.

Tim Naylor, editor of the annual BCA Used Car Market Report, said: “Our research shows that the used car market has undergone some very subtle yet significant changes over the last 12 months.

“Customer expectations in the used car buying process continue to climb and there are changes in how information is gathered when it comes to making used car buying decisions.

“Overall, there is a little more confidence expressed by motorists in terms of the economic climate, the products they are buying and the service they are receiving.

“With improving economic indicators, we could see more people looking to replace their used car with a better used car. The number of motorists saying they ‘certainly’ or ‘quite likely’ will buy a car in the next 12 months rose from 10% last year to 14% this year (a 40% rise in real terms).”

However, the recession has taken its toll on car ownership – in the past three years the number of households without a car has risen from 23% to 28% (a 21% rise in real terms.)