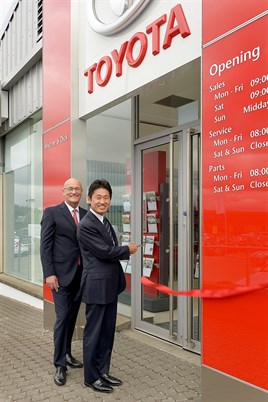 Macrae & Dick has officially opened its Toyota dealership for Inverness and the Scottish Highlands.

Masanori Nohara, executive director and coordinator from Toyota (GB) cut the ribbon at the £350,000 showroom, which actually began trading on June 1.

He said: "Toyota is delighted to be working with Macrae & Dick, who have such a long history in transportation and look forward to the Toyota brand growing in the area."

The Macrae & Dick Toyota Centre has a centre host, Emma-Jane Ross, who ensures customers are immersed in the Toyota brand from the moment they arrive.

Andrew Grzesinski, group managing director, Macrae & Dick said: ‘We are delighted to have been awarded the Toyota franchise and over the past few months we have welcomed many customers both existing and new Toyota owners to our centre and have had a very positive response to the new showroom and our customer service."