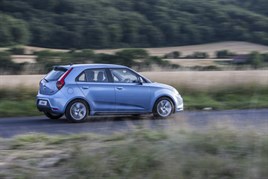 MG Motor UK has a dozen new dealers waiting in the wings to open sales points following the launch this month of the MG3 supermini.

The new car brand has a network of 30 existing franchisees, most operating multi-franchised locations such as Toomey in Basildon, who'll get their first MG3 demonstration cars on Monday, September 9.

However, it wants a much larger sales and service network in the long term as its product range broadens.

The MG3 has been designed by the SAIC Design Centre in the UK and is being built in Longbridge, Birmingham, from kits shipped over from China.

Sharing the same market segment as the Ford Fiesta, Mazda2 and Kia Rio, the 105bhp MG3 has been positioned to undercut its rivals considerably, with prices starting at £8,399 and rising to £9,995.

MG Motor UK sales and marketing director Guy Jones said first full year MG3 sales are expected to be 1,730 units, rising to 2,630 in the second year. It will be incremental sales to the MG6 model line, he said.

"The MG3 enables us to get going with our dealer network, we now have enough products to get dealers to join the franchise. We've been talking to them for two years but previously there wasn't a really profitable business case for them," Jones added.

The MG3 is heavily biased towards retail customers, and an online configurator is being launched to ensure prospects can explore all the customisation and graphics options available.