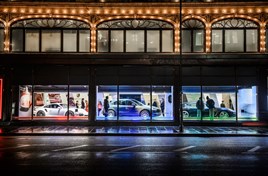 Porsche has displayed its new Macan compact SUV in the window of upmarket department store Harrods in London's Knightsbridge this month.

The Macan will be shown in London until 5 February, two months ahead of its formal arrival in UK Porsche dealerships.

In addition to being renowned for its cosmopolitan clientele, Knightsbridge in London is also rated as one of the top destinations for enthusiasts to spot the world's newest and most exotic sports cars. It is therefore appropriate that the newest addition to the Porsche family makes its first public appearance here, said the carmaker.

Fresh from celebrating its 50th anniversary in 2013, an example of the iconic 911 coupé – in this case, the new 560 hp Turbo S – sits beside the Macan in the display, together with the latest Panamera S E-Hybrid, the world’s first plug-in hybrid in the executive saloon class.

Each day between 10:00 and 20:00, fans, prospective customers and passers-by alike will be able to get up close to each of the cars on display and find out more information – furthermore, a series of evening receptions are planned to formally introduce the new Macan.

“We are delighted to be able to show the new Porsche Macan here at Harrods in London throughout January,” said Ragnar Schulte, marketing director, Porsche Cars Great Britain.

“It is a great opportunity to see the car since it will not be arriving at the official Porsche Centres until the beginning of April.”