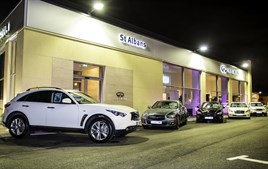 The dealer group announced it had taken on the Japanese premium brand challenger in June last year.

Glyn Hopkin is the second non-Middle East funded group to take on Nissan’s premium brand in the UK alongside  Humberside Motor Group who took on the franchise in 2012 with its Hull site. Rymco UK and Mana Premiere were the first groups to launch with Infiniti, with funding from the Lebanon and Qatar respectivley, to set up sites in the UK.

Infiniti created a video for the launch event at Lyon Way which was attended by over 100 invited guests.

Nissan’s luxury brand is still in its infancy in the UK as it looks to build brand awareness and volumes to challenge the difficult premium market segement in the UK which is dominated by German brands.

Infiniti is hoping its new Q30 C-segment car, which is being built at Nissan’s Sunderland factory next year, will help boost visibility with consumers in the UK. The Q30 will go up against models like the Audi A3 and BMW 1 Series.