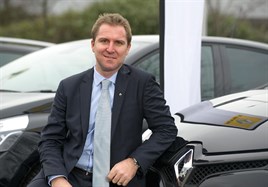 York has been promoted to a new global marketing role based in Paris.

Bordeanu will oversee all of the Renault Group’s advertising, direct marketing, product planning, pricing, vehicle distribution, market analysis, strategy and research for the UK, Ireland, Cyprus and Malta markets for both the Renault and Dacia brands.

He takes the reins on March 1 and will sit on the main Renault UK board headed by managing director, Ken Ramirez.

In addition, Chris White is promoted to the new role of deputy marketing director for the UK, Ireland, Cyprus and Malta, effective February 1. I

n this new role as second-in-command, White will be responsible for the continued deployment of effective marketing actions across the Renault and Dacia brands in the territory. She brings a wealth of experience through her career at Renault UK in a variety of roles in sales, marketing and after-sales positions both in head office and in the field, and will be performing the role of acting marketing director in the interim prior to Bordeanu's arrival.

Bordeanu said: “I am delighted to join the Renault UK group at such an exciting time for the brands with the group now back in the top 10 retail franchises in the UK. I look forward to further drive the franchise growth through outstanding brand value for both Renault and Dacia.”

Ramirez added: “It is a great pleasure to welcome Mihai into our team at Renault UK and I am confident he will make a valuable contribution to our continued success. Following such a successful 2013, with group car volume up 55%, I am very sorry to see Phil depart after the major contributions he made in leading our marketing team. I wish Mihai, Phil and Chris the very best in their new roles.”