Broadstairs employee leads the charge for electric vehicles in Kent 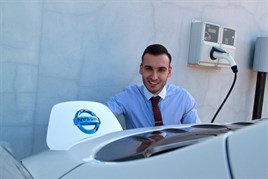 A Broadstairs car sales executive spent a month behind the wheel of a Nissan Leaf to show the benefits of owning the 100% electric vehicle.

Sam Ripley, from Dumpton Park Nissan on Ramsgate Road, took it upon himself to dispel any myths about owning the electric vehicle testing the British-built car to its limits, researching the location and practicality of the region’s network of charge points and challenging the Leaf’s impressive 124-mile range*.

Sam said: “After living with the Leaf for that time I found it equipped me with a better grasp of exactly what benefits an electric vehicle offers.

“In addition to that, I’ve seen for myself how it can actually make life simpler and this means that I know that I can answer any questions that may arise based on my own experiences and assure people that the transition to all-electric motoring is actually far easier than they might think.

“I’ve found the biggest barrier tends to be a misguided worry about getting to one of the network’s charge points, but the reality for local motorists is that it’s unlikely that they’ll travel 100 miles in a day – a commute of 50 miles in a day equates to an annual mileage of 13,000 – so the truth of it is that they will only need to charge overnight and never have to worry about ‘filling up’ again.

“I always encourage customers to take advantage of the extended seven-day test drive to really put it through its paces just as I did because I know that as soon as they do they will fall in love with the Leaf.”

And his commitment has paid off. The dealership has sold five Nissan Leafs in the past few weeks and arranged dozens of extended test drives, as well as having had significantly more enquiries.

Most new customers have been convinced by the Leaf’s ultra-low running costs of just two pence per mile and by how effortlessly the Leaf – a spacious five-door hatchback – can cope with the demands of everyday driving.

The Leaf is also exempt from vehicle tax (VED) and the London Congestion Charge.

For those planning a longer journey there is a growing nationwide network of rapid chargers at motorway service stations and other convenient locations, which can charge the Leaf from zero to 80 per cent in 30 minutes.

Sam added: “It’s great that nearly half of the interest in the LEAF is coming from local companies who can clearly see the many benefits an electric vehicle can offer them.”