Kia's M4 flagship car dealership to be no monolith 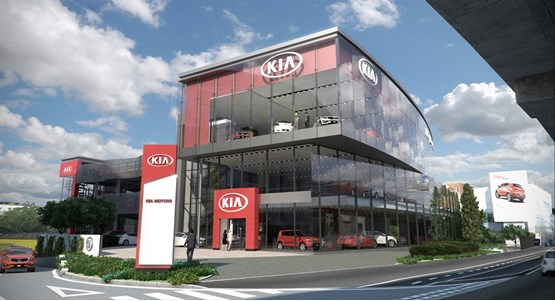 The next brand to open a flagship dealership facing the elevated section of the M4 will be Kia, with the promise of something more imaginative than a “monolith” London showroom.

The Great West Road in Brentford is already home to Audi and Mercedes-Benz, with VW also developing a brand centre in the area.

Kia’s four-storey showroom will open next April and include a top-floor experience centre that UK CEO and president Paul Philpott hints could including moving imagery, writes Richard Yarrow.

“People spend a lot of money there and have things that look like monoliths,” he said. “It can be something more than a big showroom and subject to Highways consent – we can’t have indoor fireworks going off – is only limited by our imagination.”

The three storeys below will include new and used showrooms, service centre, customer parking and a franchised coffee shop open to passing pedestrians.

The new car showroom will be on the level aligned to the M4.

The site was previously low-level warehousing and has been acquired by Kia on a leasehold rather than freehold basis. The length isn’t known, but Philpott said it was “for a long time”.

It was designed by architects Mountford Pigott.

Far from being just a hugely expensive brand billboard, he confirmed the dealership had to be a fully-functioning business that had to sell its share of cars and offer great customer service.

He said the retail partner will be announced in the coming weeks. “London is a challenging place to operate, so it’s really important that we move ahead with someone who has experience of running dealerships there,” he added.

Philpott described the site’s development as a “a very exciting project for us”, and said it was a bold statement about the importance of the UK market for the brand.

He added that visiting Korean dignitaries flying into Heathrow and heading for central London hotels will pass directly by it on the elevated M4.

Kia currently has seven dealerships inside the M25. The Brentford site will be the eighth, with a ninth in the Enfield area planned for next year.

The final open point will then be in the south-west, around Kingston and Weybridge.