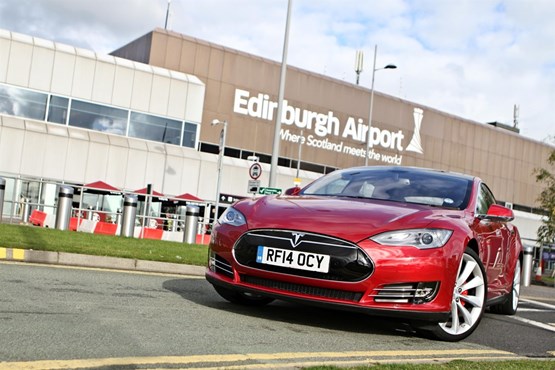 Tesla has opened a new supercharger location at Edinburgh airport as part of a network expansion to allow Model S owners to drive anywhere in the UK relying only on charging points.

The supercharger is accessible from the M8, M9, and A720 and is situated in the car park off Almond Road, near the terminal.

Model S drivers gain access to the car park 24 hours a day by pressing the button on the barrier and requesting Supercharger access. The supercharger replenishes half a charge in about 20 minutes but one hour of free parking is complimentary whilst charging.

Tesla’s UK country director Georg Ell said: “We’re really pleased to open our first Scottish Supercharger. The location makes travel in and around Edinburgh easy and also enables a route from Edinburgh to both Glasgow and Stirling and beyond.

“It’s an exciting time for Tesla in Scotland. There are plans for an Edinburgh store and service centre next year, so watch this space for more activity.”

“We’re committed to giving our passengers the best experience possible and today’s launch is a direct result of customer feedback. We look forward to a new partnership with Tesla and wish them luck in their Scottish ventures.”

The superchargers are located near amenities like motorway services, restaurants, cafes and shopping centres so drivers can stop for a quick meal and have their Model S charged by the time they’re done.