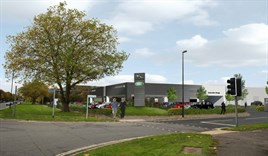 The 6.4 acre site, designed by HNW Architects of Chichester, will have a central entrance flanked by separate 8-car Jaguar and 10-car Land Rover showrooms, each with a vehicle handover bay, and a covered drive-through service drop-off lane between the showrooms and a shared service workshop.

It will also be home to a 1,467sq m separate SMART repair facility, display spaces for more than 150 cars, and 80 customer parking spaces including four electric vehicle charging points.

The dealership, described as a flagship for Harwoods Group and central to its JLR territory, is expected to sell 1,000 new Jaguars and Land Rovers per year from 2018 plus 1,000 used cars, according to documents which supported the planning application.

The brownfield site, formerly home to a BOC Edwards factory that was since demolished, is a few hundred metres from Harwoods' current dealership.

Its planning application, submitted in March, was approved by Crawley Borough Council this month.