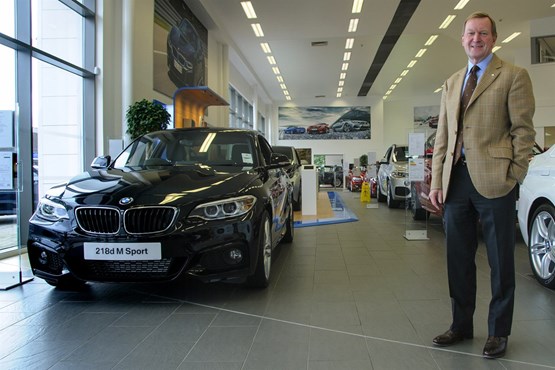 Having recently posted its fourth consecutive year of record results, John Clark Motor Group could be forgiven for looking cheerfully at the prospects ahead.

However, for founding chairman and managing director John Clark, vigilance is the order of the day – he doesn’t want his group’s growth to falter and needs all employees to be on the ball as UK motor retailers come under more and more influence and pressure from third parties.

The group has its head office in Aberdeen, but it operates 21 car dealerships across the east and south-east of Scotland, which operate under the John Clark, Specialist Cars and Pentland brands. Its headcount has passed 1,000 employees since its acquisitions last year of two Jaguar and two Land Rover businesses. It is Scotland’s second-largest motor retailer behind Arnold Clark Automobiles.

In 2013, group pre-tax profit reached £7.4 million, while turnover increased 33% from 2012, to £470m. In 2014, John Clark expects the business to break through the half-billion pound mark and go further – the budget was for £534m of  sales and Clark said performance is already ahead of plan. That means it will smash another personal best set last year, when John Clark Motor Group sold 20,000 new and used cars for the first time in its history. Looking further ahead, Clark is honest about not knowing whether the records will continue to be broken. The messages about the economy doing considerably better are hard to interpret, he said, given that people’s wages still haven’t caught up with the increased cost of living and that any rise in interest rates will have an effect, particularly on monthly mortgage payments.

“I think the industry has been getting away with murder for a long time with the way it has been increasing prices for cars and for service bills, which we certainly cannot get away with nor have we tried to get away with.

“I do believe this growth will continue on to 2015 but again, the changes coming in with the FCA rules bring some uncertainty.”

Finance ‘is a means to an end, to a sale’

Clark’s viewpoint on the new regulatory regime is similar to that expressed by many other UK dealers AM talks to. Prior to our interview appointment, Clark had been in a board meeting where FCA regulation and finance incentives were a hot topic of discussion – John Clark Motor Group operates its own joint venture finance company and contract hire business in addition to offering manufacturer finance.

Clark said the group does a lot of finance, which it has incorporated into the sales process. It has business managers in all its franchised sites and certain dealerships doing high sales volumes have multiple BMs – one site has six. A group F&I manager based at the Aberdeen headquarters oversees the function. Current finance penetration is 66% of new cars and 53% on used, both three percentage points higher than last year’s results. The group is Specialist Automotive Finance-approved.

“It is very important to us because it is a means to an end, to a sale, and that’s why PCP has been so important recently. Go back 10 years and it was only hire purchase and some contract hires, but now the mindset of the customer is in monthly payment.”