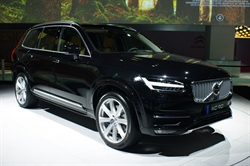 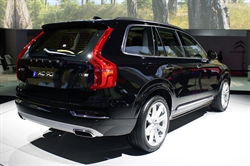 The arrival of Volvo’s new large SUV marks the beginning of a new chapter in the Swedish brand’s history, one in which it aims to secure a true premium brand spot alongside BMW, Mercedes-Benz and Land Rover.

Order books open at the end of this year, ready for first deliveries in May 2015. The new XC90 is based on Volvo’s Scalable Platform Architecture (SPA) and uses the brand’s new family of Drive-E engines introduced earlier this year in a number of its other cars.

The most popular model is expected to be the XC90 D5 with a 225bhp four-cylinder engine and all-wheel drive. A range-topping model, badged as T8, will be a plug-in electric, hybrid and high-performance car rolled into one, says Volvo. A twin-charged four-cylinder petrol engine powers the front wheels and an electric motor drives the rear wheels.

The car has a premium interior that is uncluttered. Highlights include a crystal glass gear lever and a centrally mounted touchscreen whose display functions as a stack of ‘tiles’, with navigation at the top, followed by media and telephone, and the XC90 has a new cloud-based navigation system provided by Ericsson. Other cloud services will include internet radio, music streaming and apps for finding and paying for parking. The XC90 will also have the option of Apple CarPlay and Android Auto for syncing smartphones.

A standard safety package includes two world-first safety technologies: a ‘run-off road protection package’ and ‘auto brake at intersection’ capability. With the first, should the driver lose control and run off the road, the car can detect what is happening and use technology to keep the occupants in position and help prevent spine injuries. The second provides automatic braking if the driver turns in front of an oncoming car.