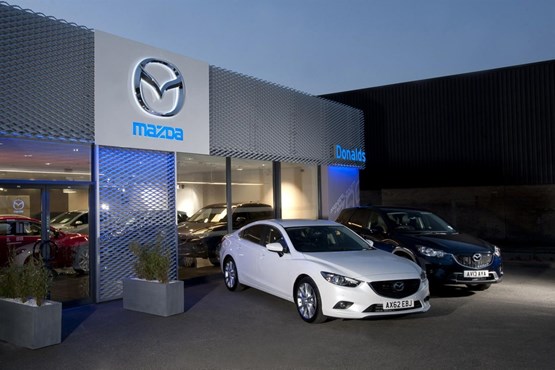 By Christmas 2015 the current Mazda franchise will be “unrecognisable” and transformed, according to its UK managing director Jeremy Thomson.

By end of next year 97% of the new cars Mazda dealers sell will be the carmaker’s latest Kodo design with Skyactiv technology which is already seen on the CX-5, Mazda6 and Mazda3. Replacements for the Mazda2 supermini and MX-5 roadster will enter showrooms in 2015 and a new market segment will be opened for Mazda dealers with the arrival of the CX-3 B-segment crossover before the year-end.

By March next year 80% of the Mazda UK network will have the brand’s new corporate identity in place.

Dealers can see its importance in showcasing the new models, Thomson said, and the UK is probably the foremost market in adopting it.

Mazda UK is supporting its dealers with a three year interest free loan to fund the changes.

“The car is the star, we’ve not just put flash, pretty furniture in and taken a car out to accommodate it, as some brands have.

"We’ve taken a sensible, pragmatic approach to this but it has to have kerb appeal. We’re not necessarily in the biggest dealerships, so it has to create instant recognition of this new look Mazda with a real brand presence.”

Thomson thanked franchisees for “sticking with us through some very difficult years” and added: “Those with us today can look forward to a very bright future.”

He said per unit retained profit on Mazda’s 6th generation cars, the Kodo design models, is significantly better than the older models.

At a mass level, the network will be much better off in that Mazda is growing its volume significantly but not increasing the number of dealerships, so the volume of pure retail sales through the network in 2015 will be the highest in real terms since 2001 when Mazda Motors UK was formed, he said

On the fleet side, Mazda dealers are earning money from quality fleet deals and are benefitting from a year-long campaign with Motability, Thomson added.