Toyota is miles ahead of any other car manufacturer when it comes to Twitter, according to research from Auto Trader and social media analytics platform BirdSong.

Partly due to strong engagement outside normal office hours, Toyota scored 76 points on a collation of metrics including presence, engagement and activity - 21 points ahead of second place Nissan, followed by Citroen and Fiat.

Auto Trader market research director Nick King said: “With 64% of a car buyers’ research happening after 6pm it makes absolute sense to have a social media strategy that does not switch off after 5pm or at weekends. Out of hours multi-screening is now the norm and brands that ignore this fundamental change in buying behaviour will start to lose ground to trail-blazers like Toyota.”

The research also looked at the franchise network and independent dealers. Porsche Retail Group’s @PorscheRetail topped the franchise leader board with a BirdSong Twitter score of 50, with second and third spots were taken by Arnold Clark and Pendragon.

Consultant and former business development director at Auto Trader, who worked with BirdSong to compile the research, Jim Haysom said: “The largest franchise groups typically have numerous accounts, some managing over 20 profiles covering different franchises and locations, and that can potentially lead to problems.

“Dealers should focus on creating a social strategy and fully committing to it for all profiles. The best campaigns can be spoiled if dealers are tweeting the wrong type of content to the wrong audience at the wrong time.”

Completing the study, Imperial Cars of Swanwick took first place among the independents, followed by Fords of Winsford and Carcraft.

BirdSong’s Twitter analytics research assesses an account and scores it on aspects such as how often you tweet, how engaging you are with your followers and people you follow, how often you respond to tweets, how often you retweet  engaging content etc. A single score out of 100 is then generated.

Check out full results of the research below. (Statistics correct as at October 17, 2014). 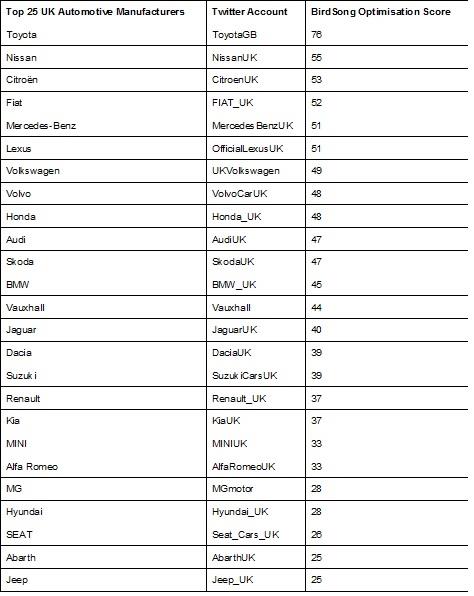 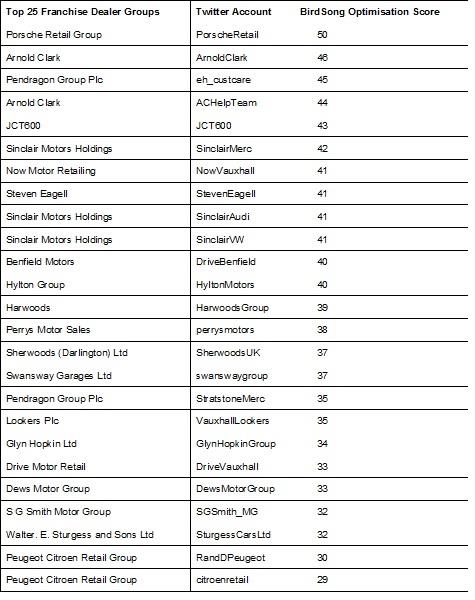 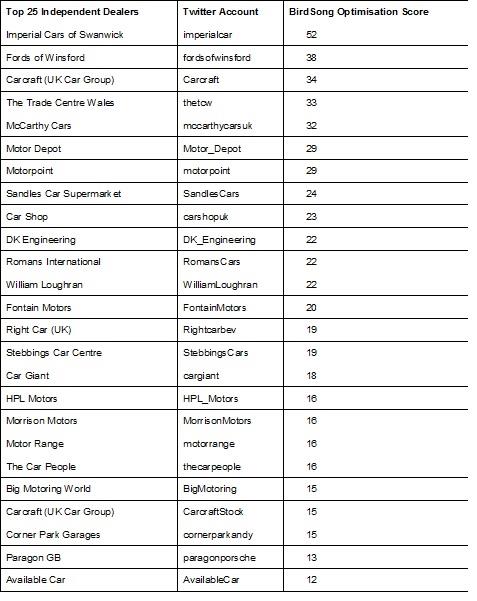 AM Poll
What is your take on the car retail sector's ongoing vehicle supply shortages? Please leave a comment
Vote
View all
3321