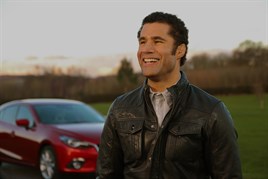 Mazda has launched a new Facebook marketing campaign centrered on figures throughout history that have challenged convention, which is the brand’s new strap line.

Running now until March 10, the campaign features a series of filmed interviews with 10 ‘Real Challengers’ who have defied convention through demonstrations of outstanding courage, determination or innovation across the very broadest spectrum of human endeavour.

The remaining five films will go live between 25th February and 7th March, and will feature:

Mazda’s Facebook community will then be asked to choose between one of two challenges to be performed by Richard Parks himself at the close of the campaign -skeleton bobsleighing or a ‘graffiti challenge with help from the community’ type of activity, a film of which will be shown on March 31.

Participants must use the new Mazda Facebook App to vote for Richard’s challenge, and this will automatically enter them in a draw giving one of them the opportunity to own a new Mazda3 for a year. Entry is through the Mazda UK Facebook page on the ‘Mazda Real Challengers’ tab, accessed via Facebook or http://www.mazdarealchallengers.co.uk.