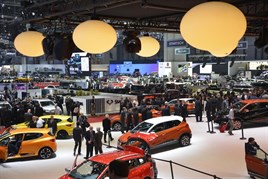 As dealers prepare for one of the busiest months of the year with the March plate-change, the new models they will be selling in the years to come will be unveiled at the Geneva Motor Show on March 4.

AM will be attending the motor show to interview manufacturer bosses, as well as get up close to the new models which will be arriving in franchised dealer showrooms in the near future.

To keep up-to-date with all the new model launches, interviews, videos and pictures look out for AM’s coverage on am-online.com, AM’s Twitter page and AM’s Facebook page.

New cars set to debut at the Geneva Motor Show 2014 include:

TT: third generation of seminal coupe is understood to be on its way to the 2014 Geneva show

DB9 Carbon: you can guess what's been added to justify this special edition coupe...

4-series Gran Coupe: is it a coupe? is it a saloon? We suspect this Audi A5 Sportback rival is a cash-cow in waiting

C1: spider-nosed city car is the sister act to the new Peugeot 108

C4 Cactus: radical supermini-crossover looks like a moon buggy and is impressively lightweight

Panda Cross: the world's cutest 4x4 toughs up for Geneva

California T: it's twin-turbocharged, it drinks less, goes faster, and looks sexier than the old Cali. A win-win-win-win!

Focus facelift: hurrah, the Focus has finally been updated inside and out

Huracan: Can this sharp V10 coupe really see off the Ferrari 458 Speciale and McLaren 12C?

Range Rover Evoque Autobiography Dynamic: stupid name, but the Evoque finally gets the power it needs

S-class Coupe: CL replacement can learn into corners, and be specced with crystal headlights

Twingo: A 911 for for eight grand? The new Twingo seats four, is rear-engined, and rear-wheel drive!

108: cute city car is the replacement for the best-selling 107

308 SW: Smart-looking, big-booted Pug wagon got the thumbs up from CAR readers in our first official pictures story

919 Hybrid LMP1: Porsche's return to Le Mans enters the home straight with the full reveal of its endurance racer

Vision C concept: ostensibly the poor-man's Mercedes CLS, but it's based on the excellent new Octavia