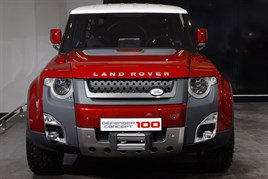 Land Rover's design director Gerry McGovern has said the new Defender will be a radical departure to the current design if a model makes it to production within the next three years.

The company makes around 20,000 Defenders a year, but McGovern said this number needs to increase dramatically to make a new Defender project worthwhile.

Land Rover has already created a Defender concept which hints at what a future production model could look like.

He said: "We are still making the business case, ultimately the new model will have to wash its face. We need to be looking at 100,000 vehicles a year and so we have to broaden its appeal.

"The current Defender has never sold on its design and has changed very little over the years. What we are working on is something that will be more desirable to look at - the traditionalists might not like it but they'll have to live with it.

"It will still be as capable as before and there will be references to the old model - it might even have a spare wheel on the back.

"The important thing is to get the proportions right, give it a distinctive silhouette and wider appeal. A Defender doesn't have to look overtly functional. We are taking a more sophisticated approach."

McGovern said the new Defender would have to me more relevant to the modern world, lighter, more aerodynamic and more cost effective.

He said: "There is still a lot of work to do on the business case, the architecture, where we will build it etc. so we are still looking at least two years or more from now."