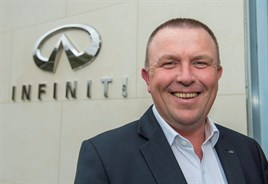 Desira Group has acquired an Infiniti franchise for Norwich.

The premium car dealership will open in a a prominent purpose-built showroom on Vulcan Road North in Norwich to serve customers across the East of England.

Operated by the family-owned and East Anglia-based Desira Group, the centre will be Infiniti’s ninth nationwide, with Vertu Motors previously announced addition becoming the 10th.

Stuart Stone, managing director of Desira Group, said: “I’m totally convinced the region’s drivers are going to love the Infiniti ethos and will really appreciate having another, altogether more distinctive choice than the usual suspects.

"I also know for a fact they will really value the Infiniti customer experience and the exceptionally high standards of care Infiniti Norwich will offer."

He added: “We are also delighted to be adding a premium marque of Infiniti’s stature to Desira Group’s portfolio of manufacturer franchises. This will allow us to offer our customers a more aspirational product and retain their custom."

The centre will be officially opened on May 1 at a glitzy evening ceremony attended by VIPs, brand ambassadors and senior executives.

This will be followed by an open weekend at which visitors will be able to test drive Infiniti’s stunning range of models, including the recently launched Q50 premium sports saloon.

The weekend will also give members of the public the chance to view the Infiniti Red Bull racing car as driven by Formula One champion Sebastian Vettel, as well as the Infiniti FX Vettel – a special limited edition version of the brand’s QX70 luxury SUV developed by the motorsport superstar in his role as Infiniti’s Director of Performance.

A once-in-a-lifetime F1 prize will be available to win throughout the weekend in a free grand prize draw for a pair of tickets to tour the Infiniti Red Bull Racing factory, whilst raising funds for Desira’s chosen charity - the East Anglian Air Ambulance.