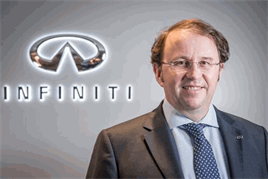 He replaces Fintan Knight, who had been in the role since May 1 last year. He has chosen to "pursue interests outside the company".

De Bouillé (pictured), a French national, will be responsible for managing Infiniti’s business and steering its growth plan in EMEA.

He is currently vice president, global operations, for Infiniti based in Hong Kong.

In addition, he has full market responsibility for the Asia & Oceania region. In his new capacity, he will be based at Infiniti’s EMEA headquarters in Rolle, Switzerland. He will continue to report to Johan de Nysschen, Infiniti president.

“François Goupil de Bouillé is a proven automotive leader who has a wealth of experience in Europe. He is one of our most senior executives and has an impressive track record," said de Nysschen.

"I am looking forward to his leadership particularly as we prepare for the launch of the Q30 in 2015.

“Fintan Knight has played a key role in shaping Infiniti as a modern and young challenger brand with an attitude. At the same time, he transformed the EMEA organisation in preparation of future growth. I am grateful for his contributions and wish him all the best for his future endeavours.”

De Bouillé has spent his 30-year professional life at Ford and Nissan.

His international career includes leadership positions in sales, marketing and aftersales in countries such as France, Hungary, Switzerland and Russia.

Under his leadership, Nissan emerged as the number one Japanese brand in Russia, tripling its annual sales from 50,000 to 150,000.