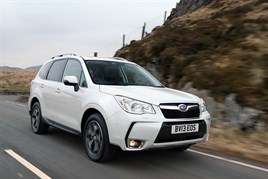 The Brookside Garage on Anglesey has been appointed as a new Subaru dealer.

Located on Holyhead Road in Cemaes Bay, The Brookside Garage was established over 30 years ago, and has built a reputation across the region for personalised customer care.

The Brookside Garage will house the full range of all-wheel drive Subaru cars, from the recently-launched Forester SUV, revised Outback estate and XV compact crossover, to its BRZ sports car.

Subaru’s expanding dealer network was recently ranked second in the United Kingdom in the influential Auto Express Driver Power survey, while the Forester was named 2013 ‘Mid-sized SUV of the Year’ by 4x4 Magazine.

Sean Chamberlain, dealer principal at The Brookside Garage, said Subaru's range suits the lifestyles and needs of people in its particularly rural area of the country.

"We are confident that the Subaru model range will appeal to buyers on Anglesey and throughout North Wales, and we look forward to offering our widely recognised level of outstanding customer service to new and existing customers.”

Paul Tunnicliffe, managing director of Subaru UK, said: “With a respected position across the area, we’re certain that The Brookside Garage will uphold these values in the region and we believe the rugged Subaru range will appeal to a broad range of buyers who visit the dealership.”