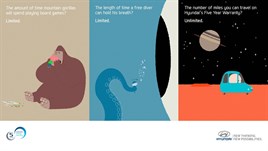 Hyundai has launched a new multi-platform digital campaign called ‘A World of Limits’, to promote its five-year unlimited mileage warranty.

The marketing campaign features a collection of short animated films, which feature an acoustic version of the 1993 song No Limit by Dutch Eurodance band ‘2 Unlimited’, uses sky divers, gorillas, bouncy castles and mariachi players to take a tongue-in-cheek look at how even the most remarkable situations in the world have their limits, before reminding viewers of the ‘unlimited’ nature of Hyundai’s warranty offer.

Mark Hall, vice president of marketing at Hyundai Motor Europe, said: “Through ‘A World of Limits’ we’re reaching out to people at the beginning of the car-buying process.

“We know that warranty is an important consideration for many consumers, but it’s quite a dry topic. Our campaign is an attempt to promote Hyundai’s industry-leading, unlimited offer in a warm and engaging way.”

The new campaign will run across multiple media platforms, including television, cinema and print, as well as online and social media channels.

Hyundai has offered its warranty package since 2010.