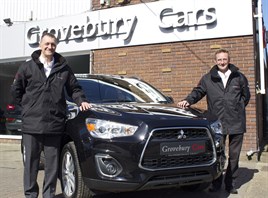 Family-owned Grovebury Cars has taken on the Mitsubishi franchise in Leighton Buzzard.

The business also operates Kia, SsangYong and Chevrolet franchises across sites at Dunstable, Leighton Buzzard and Tring. The business is run by managing director Martin Camplin.

Grovebury Cars was established in 2002 and Camplin has built the business up, along with his wife Jacqui, from a team of four to 40 people employed across three dealerships, with sites in Tring and Dunstable added in recent years.

Camplin said: “We wanted a new franchise and we looked at a number of options but kept coming back to Mitsubishi.

“We wanted a brand that offers quality, reliability and value for money. Mitsubishi had a great year last year and they are determined to push on so this is an exciting time.”

Grovebury joins the Mitsubishi franchise as it looks to launch its new Outlander plug-in hybrid, which it will be pricing at the same level as the equivalent diesel.

Mitsubishi has also increased its marketing budget from £8 million to £20m this year in order to help support the launch.