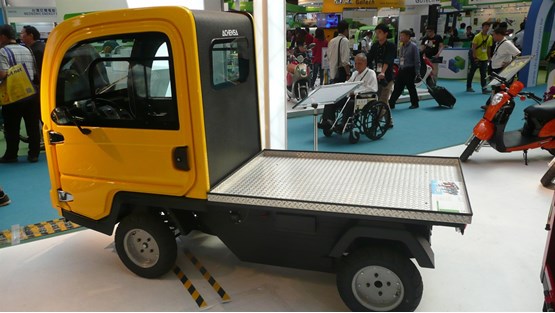 A Taiwanese company which claims to be number one in the British mobility scooter market has developed a range of two-seater electric cars and light commercial vehicles which are destined for the UK.

The scooters are sold under the Shoprider brand name and made by Pihsiang, which also manufactures power chairs and electric scooters. The company sells around 10,000 mobility scooters a month in the UK alone. Six months ago Pihsiang moved into EV manufacturing and sales in Holland are already "into the thousands".

Currently, the vehicles are available only in Holland, the first country to set up a distribution network, but CEO Donald Pihsiang is anxious to move into the UK "as quickly as possible", sensing a market in London in particular.

The car meets all European crash-test requirements, even without airbags, because of what Pihsiang calls its "revolutionary impact-absorber" construction. The chassis is made of steel but the bodywork is plastic. A four-seater version has also been given EU approval.

The A100 uses Pihsiang's patented lithium-iron-phosphate battery technology, which has been employed in Russian space craft, French military installations and even in submarines.

Pihsiang says this technology is much safer than lithium-ion because it can never catch fire or explode, has a higher energy density and operating life, costs less and - with the 5.7kWh battery capacity of the A100 - can be fully recharged in 100 minutes.

The car has been in development for six years and tested over 100,000 kilometres (62,000 miles) without problems, says Pihsiang.

The driving range is a little over 50 miles and the top speed is either 28 or 50mph, depending on which version the customer wants.

Pihsiang is now trying to get sales networks established in most major EU countries and is also hoping to move into the US market. Interest has also been expressed by Australia, he says.