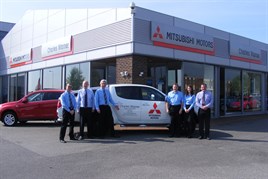 Charles Warner has taken on the Mitsubishi franchise in Lincoln at its Outer Circle Road showroom.

The group also has dealerships in South Hykeham and Gainsborough with the Vauxhall, MG and Chevrolet brands.

Mike Seward, Charles Warner managing director, said: “We are a well-established family business, now on our third generation. We like to think we look after people well and as such, we do benefit from a lot of repeat business. It’s the ideal time to be joining Mitsubishi Motors in the UK as we recognise it’s a brand that’s very much in the ascendancy and there are exciting products coming through."

Charles Warner joins the Mitsubishi franchise as it looks to launch its new Outlander plug-in hybrid, which it will be pricing at the same level as the equivalent diesel.

Mitsubishi has also increased its marketing budget from £8 million to £20m this year in order to help support the launch.