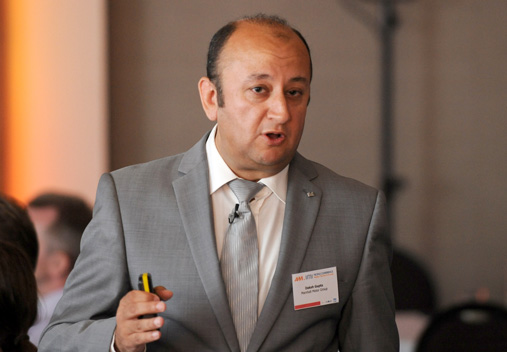 Transforming a regional business into a national company can only succeed if its people are genuinely at its heart, according to Daksh Gupta, chief executive of Marshall Motor Group.

“Since 2008, our turnover has grown from £250m to over £1 billion. This hasn’t been achieved just though acquisition as our organic turnover per site has moved from £9.7m to £17m over that period,” said Gupta.

The only way to achieve such success is with the highest levels of engagement with employees.”

'We had some very loyal employees, but never recognised them until they had worked for us for 30 years' -
Daksh Gupta – Click quote to tweet

Marshall went from having 41 dealerships, exiting 23 sites, to becoming a national player with 70 retailers from Cumbria and Scarborough in the north to Plymouth in the south. Employee numbers increased 275%, from 800 to 2,200, between 2008 and 2014.  Gupta said: “72% of our portfolio is less than five years old as we have bought and sold more than 70 businesses since 2008. We have acquired businesses from 12 different companies, almost of all of which were loss-making, so the people challenge has been significant.”

“We had some very loyal employees, but never recognised them until they had worked for us for 30 years,” said Gupta. “One of the first things we did was send employees who had been with us for five years champagne and for those who went on to work with us for 10, 15, 20 and 25 years, we arrange a weekend away with their partner.

“We also introduced the Marshall CEO Awards and ensured it was open to all staff, particularly those who would have been excluded from traditional incentive schemes. Any employee can nominate a colleague and we have eight winners who also receive a weekend away.

"We send around 40 colleagues twice a year to all sorts of locations like Moscow, Iceland and Croatia. While doing all of these things costs the company a very large six-figure sum, for me it’s an investment in our people and it has proved to be a vital component of the Marshalls culture.”